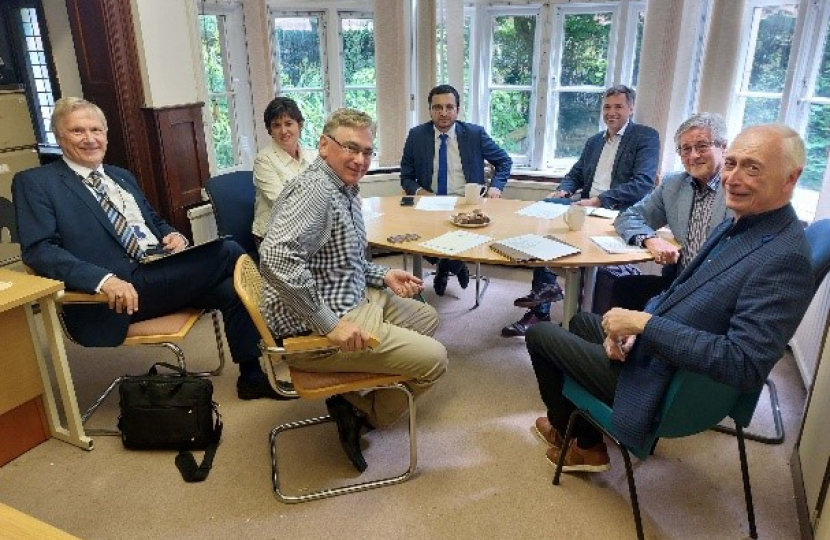 On Friday, Saqib Bhatti MP (Meriden) and Julian Knight MP (Solihull) met with the West Midlands Police Independent Advisory Group to discuss the future of policing in the Borough. Cllr Ian Courts (Leader of the Council) and Cllr Karen Grinsell (Deputy Leader of the Council) were also in attendance.

Following the decision made by the Police & Crime Commissioner to rubber stamp plans as part of his Estates review to close Solihull Police Station on Homer Road, both Saqib Bhatti MP and Julian Knight MP have been leading the campaign to ensure West Midlands Police have a permanent policing base in the south of the Borough.

Earlier this year, Julian Knight MP secured a vital debate in the House of Commons chamber to put pressure on the Police & Crime Commissioner to publicly commit to ensuring the south of Solihull continues to have a permanent policing base. Saqib Bhatti MP rightfully highlighted the added pressures that policing in the north of Solihull would face if the south of the Borough was left without a permanent policing base. During the debate, the Minister of State for Policing, Kit Malthouse MP, confirmed that the Home Office funding allocation to West Midlands Police would be increasing in 2022 – 2023 to £695 million, up £39 million from the previous financial year.

The West Midlands Independent Advisory Group, which is made up of residents from the local community, was established to relay the concerns of the community to the Force and the Police and Crime Commissioner.

On the basis that the Police & Crime Commissioner will be closing the base at Homer Road, Saqib Bhatti MP and Julian Knight MP met with members of the local Independent Advisory Group to discuss alternative sites around Solihull that could be used to accommodate a policing base in the south of the Borough.

Julian Knight MP said “My constituency, which is served by the Homer Road Station, The Borough of Solihull has a population of over 215,000 people, it is unimaginable to think that an entire Borough would be served by one Police Station in Chelmsley Wood. Both Saqib and I will carry on working hard to ensure our constituents are kept safe in light of the Police & Crime Commissioners decision”.

Saqib Bhatti MP said “I, along with Julian and the leadership of the council are united that we must have a proper police base which caters for the borough of Solihull. The safety and security of our community should always be above party politics and we were pleased to have this discussion with the independent advisory group”.

Transport Secretary Grant Shapps on building a railway fit for the future.