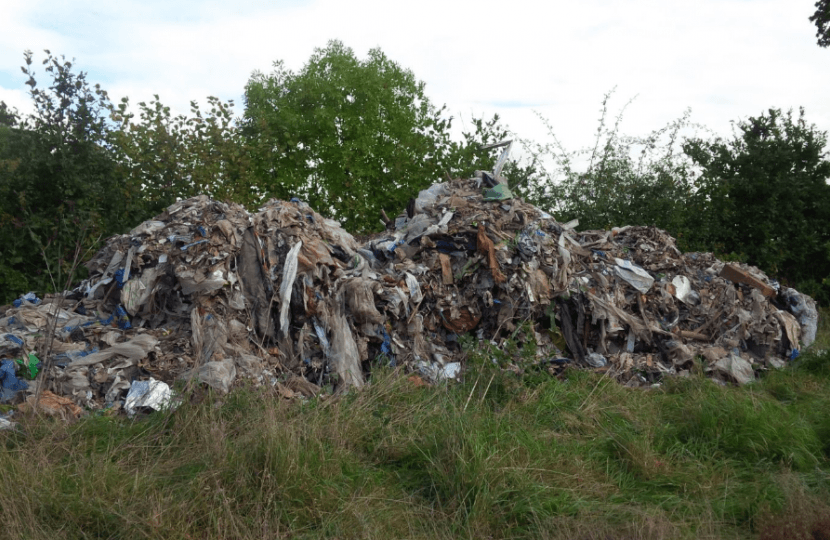 Local MP, Dame Caroline Spelman, has joined Solihull Council to urge residents to come forward with any information which may aid the local authority's efforts to tackle three separate incidents of fly-tipped wast in locations throughout the Meriden Constituency.

Following the discovery of the fly-tipped waste in Meriden, Stonebridge and Hockley Heath, the Council's Environmental Crime Team has launched an investigation and is examining the locations of the illegally dumped rubbish, which includes household waste, clothing and commercial waste, for evidence.

The Council anticipates it will cost the tax-payer thousands of pounds to remove the fly-tipping from the three sites.

It is not known precisely when each of the fly-tips occurred or whether they are linked although the Council was first notified of them on Wednesday 5th October.

Dame Caroline Spelman said; "I was shocked to see the green verges, previously cleared of all litter by the council, being desecrated by piles of rubbish which will now have to be removed at the public's expense. I would urge local residents who may have any information about these incidences to contact the council's environmental team so that the authority can take appropriate action."

SMBC are advising members of the public to report any information they may have about the fly-tipping to the Council by calling 0121 704 8001, emailing connectcc@solihull.gov.uk or reporting it via the council's website.