Julian & Caroline take fight for Dementia Ward 10 to the top! 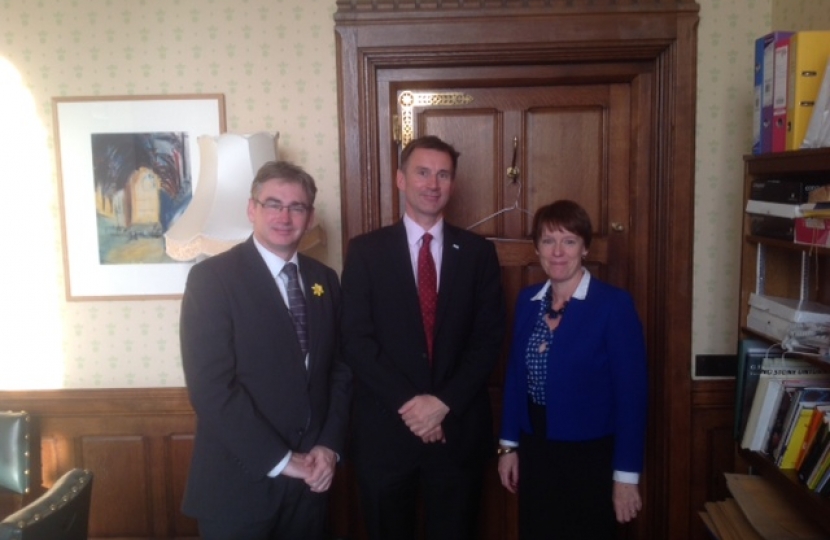 Caroline Spelman MP for Meriden and local NHS campaigner, Julian Knight have met with the Health Secretary, Jeremy Hunt to tell him of the threat to dementia ward 10 at Solihull hospital.

The emergency summit over ward 10 is just the latest step in Julian and Caroline's joint campaign for better elderly care services in Solihull.  And, Health Secretary, Jeremy Hunt has been championing care for those in dementia through a series of national campaigns.

Julian Knight said: "The Minister was very interested in what we had to say as we made a powerful case to him for ward 10. I stressed just how much this ward and the fantastic care it offers means to the people of Solihull. We have had nearly 600 signatures on our petition to keep the ward and the Facebook page has gone into meltdown."

Julian added; "Ward 10 should stay unless we can clearly see a better replacement. Since launching this campaign, I have been completely overwhelmed by public support and made all your views clear to the Health Minister."

Caroline Spelman, MP for Meriden who first alerted the public to the threat to ward 10 and has been campaigning hard on the issue said: "I appealed to the Secretary of State to intervene on the closure of the dementia ward at Solihull Hospital, because it is still unclear which of the key players is responsible.  If extra winter pressures money can be provided earlier than usual it should be used to keep ward 10 open.  We want the closure postponed until we know that a satisfactory dementia care service is in place. "