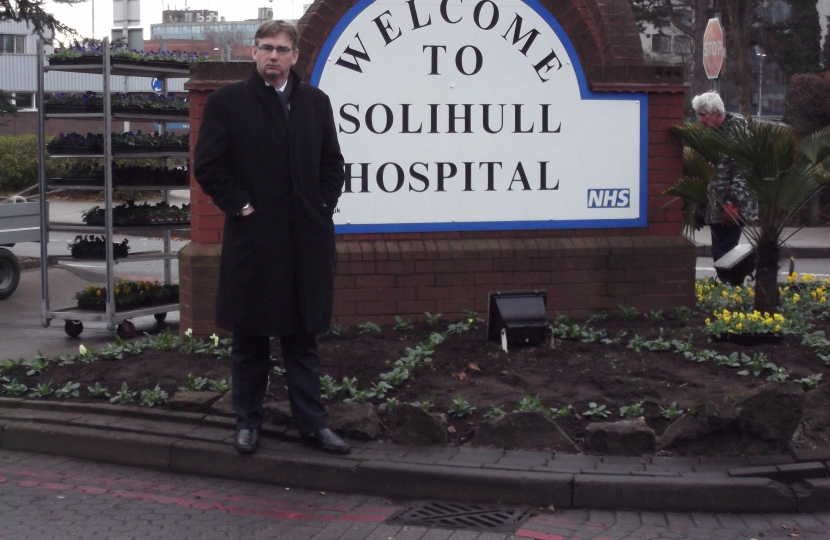 Julian Knight, local NHS campaigner and prospective Conservative MP for Solihull, has written to the Health Secretary Jeremy Hunt MP asking for urgent talks over the threatened closure of Solihull Hospital’s Dementia Ward 10.  Julian has been told by senior officials at the Department of Health that his request for an urgent meeting with Jeremy Hunt has been accepted.  This meeting will take place at the earliest opportunity.

A petition has been started and a landmark social media campaign launched.

Julian said; “I have helped save Solihull’s NHS walk in centre and local bus services over the past few months, but I have never seen anything like the public response to the threat to Ward 10 at Solihull Hospital.

“We are a caring town and the overwhelming feeling is that our most vulnerable elderly people cannot be left without proper care in Solihull Hospital. I, like countless people here in Solihull has seen a loved one slip away through dementia.”

“Judging this strength of feeling I think we need action now. I am delighted that my request to meet with the Health Secretary has been approved.  I will not rest until we have secured the future of dementia ward 10 and other key services at Solihull Hospital.  Considering Mr Hunt has launched his own campaign over dementia care, I think he will be very interested in what the Heart of England Trust are up to.”

Julian’s and Caroline Spelman’s Facebook campaign page – set up just last week - has seen over 10,000 views and 1,600 local people have ‘liked’ or commented on the status.

More than likely, this makes the Save Ward 10 campaign page the biggest and fastest growing ever in the history of Solihull.

Peter Doyle, who has helped set up the campaign page said:   "I've been overwhelmed by the immediate and massive support our 'Save Solihull Dementia Ward' campaign has gained in only a few days.   Dementia is a terribly sad process which has touched my life recently and with our increasing ageing population here in Solihull, a dedicated specialist Dementia ward is very much needed in Solihull.”