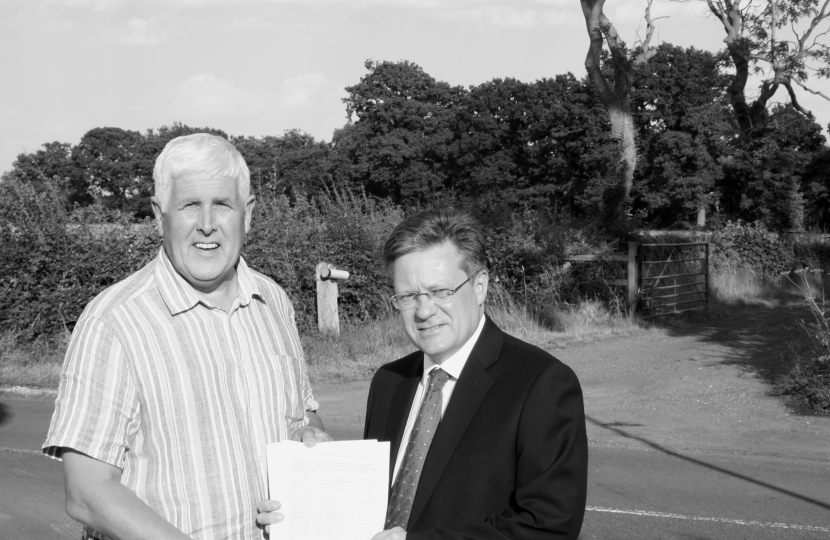 Residents will recall Cllr Ken Hawkins wrote to the club 2 years ago requesting they withdraw their application to build homes on Green Belt land off Creynolds lane, create a new entrance to the Club via Creynolds Lane and build a golf range and academy. The latest proposals by the golf club are very similar, but with fewer houses to be built.

A petition was organised as soon as the latest planning application was published and almost 200 residents of Cheswick Green have objected to the plans. There are sound reasons for doing so,   eg: the land is not safeguarded in the Local Development Plan for development (this is a key issue);  the land is in Green Belt and the creation of the new entrance to the golf club, via Creynolds Lane, would be detrimental to traffic safety on that road - which is, in effect, an extremely busy country lane.

Ken Hawkins attended and spoke at the public meeting recently organised by the Residents Association. He informed the meeting this was one of several planning applications made to try and ‘beat the system’ before the Council’s own Local Development Plan is adopted by the Planning Inspectorate (which will hopefully be done later this year.)  Ken said:  “I will present the petition to the Council and address the Planning Committee when the application goes before them in September.  I feel very strongly about this application and am annoyed the Club did not even consult with residents about the new application.”

Local Campaigner, Richard Holt, who is also Chairman of Dickens Heath Parish Council,  said:  '“The  number of planning applications is an issue for the parish councils in this area and we are holding a joint meeting with Cheswick Green Parish Council to discuss a joined-up approach to combat them. This application seeks to build on Green Belt land and clearly that should be refused.”

If you have not already signed the petition and wish to object to the plans you can still do so by writing to: Mr G. Palmer, Head of Planning, Solihull Metropolitan Borough Council, Planning Services, PO Box 11652, Solihull B91 9YA, quoting application number 2013/1126.