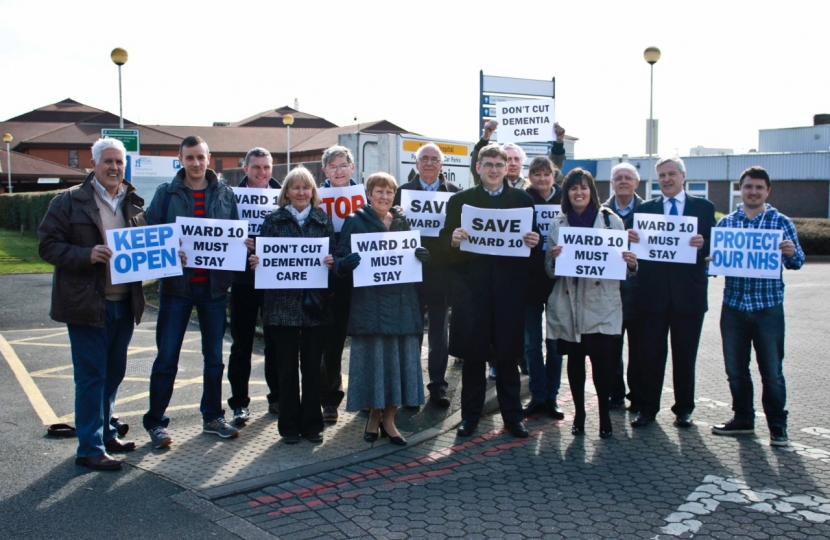 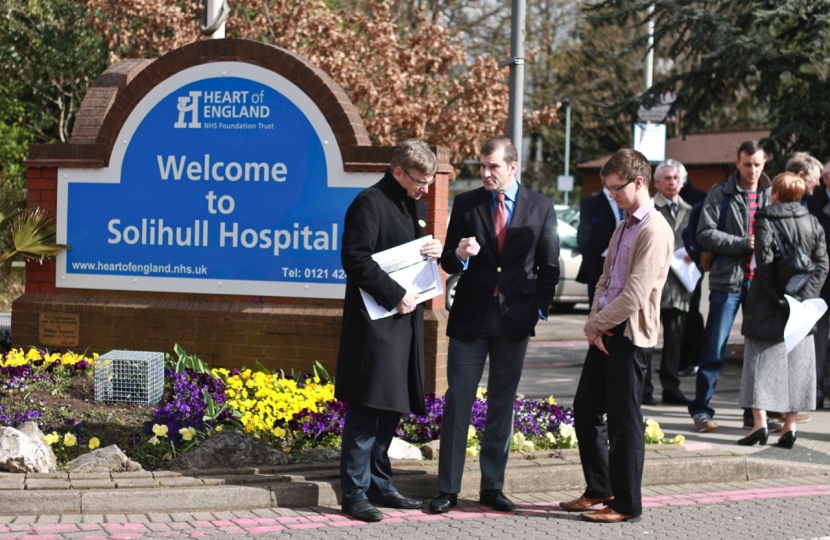 Julian Knight, local NHS campaigner and Conservative Parliamentary Candidate for Solihull, has led a mass protest at Solihull hospital over plans to close Dementia Ward 10.   Dozens of demonstrators gathered to show their support for the staff and patients on Dementia Ward 10.

The campaign to save Ward 10 has been led by Julian Knight and Meriden MP Caroline Spelman.   The Facebook page set up by Julian and Caroline has gone viral being viewed more than 20,000 times. At the same time, the petition to save ward ten has over 500 signatures, making it one of the biggest in Solihull’s history. Julian showed a sample of this petition to Martin Sandler, Clinical Director for Elderly Medicine at the Heart of England Trust.

Julian said “If the powers that be want to know how much this matters they need only log onto the Save Ward 10 facebook page or see the signatures on my petition – Labour, Green and Conservative supporters it doesn’t matter, this issue cuts across mere politics. It is about the most vulnerable people in our town who have worked all their lives and deserve the best care.”

Straight after the protest Julian was briefed by health chiefs over plans to close Ward 10 and while he has welcomed that the Ward will remain open while the consultation continues – a standard procedure in a case such as this – he is deeply concerned that the Ward will still be closed with inadequate plans for replacement care in place.

“I think people can accept that times change as do treatments, but what those who have signed my petition and myself cannot accept is closure of Ward 10 and patients being simply farmed out to general wards where they often deteriorate.”

Speaking about the blame game going on between different branches of the NHS over who is responsible for footing the bill for Ward 10, Julian is unequivocal.

“It seems to me that each branch of the local NHS is playing pass the parcel with Ward 10. We need straight answers on this. Who is responsible for Ward 10 facing closure? How can we persuade them to keep this fine Ward or at the very least ensure that there is care of equal standard provided for those with dementia in Solihull.”

Julian pledged: “Ward 10 will not be allowed to slip quietly into the night, we will fight on.”