MP for the Meriden Constituency

Saqib Bhatti was born in 1985 in Walsall, West Midlands. Educated at King Edward VI School for Boys in Edgbaston before going to the London School of Economics to read Law. “The biggest influence on me is my father who moved to the UK in the 1960s in pursuit of the ‘Great British Dream’, he taught me the values of hard work, integrity and determination which have driven my life so far.”

Saqib is the youngest ever President of the Greater Birmingham Chambers of Commerce and is a voice for over 3,000 businesses in the West Midlands. He is the former President of the Asian Business Chambers of Commerce. By profession he is a chartered accountant based in Birmingham. Saqib qualified at Deloitte and has been a director in his family’s accountancy firm since 2011. Saqib Bhatti is a strong voice for business and believes in business as a force for good.

Saqib was on the National Board for Vote Leave and campaigned to give ethnic minorities a voice on the Leave side of the debate; he is currently Deputy Chair for the Andy Street 2020 Campaign. Saqib is a board member of the West Midlands Reserve Forces and Cadets Association. In 2019 he received an honourary doctorate from Aston University in Business Administration and has been a guest lecturer at Birmingham City University, Warwick University and University College Birmingham.

Charity work is a fundamental part of Saqib’s life: in July 2019 he raised £27,000 for Prostate Cancer UK and has supported charities around the world in providing education and training for women. He has also formerly served as a trustee of The Lord Mayor’s Charity in Birmingham and on the board of the Lunar Society. Saqib has written for the Birmingham Post and has appeared on Any Questions and The View with Adam Boulton on Sky News. He is a keen traveller and enjoys a variety of sports. 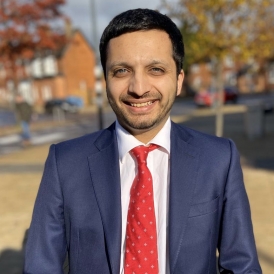